When I was growing up, trying to convince people that games were an art form felt impossible… there I was, a massive fan of my generation’s very own medium, and to everyone around me, it was considered trashy, and base. God I wanted them to love games like I did. But when you’re trying to convince an older generation of their merit, and they’re reading old-school games from the perspective of an old guard of literary criticism, it’s easy to turn snob and refuse to take the medium on its own terms. And what’s a 10 year old going to say to a Professor of English Literature? “In a game, the story is different every time!”. Yep. I actually tried that. Oh God why? 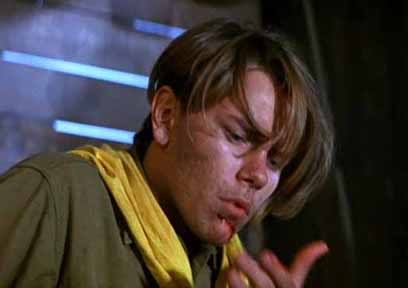 It took a while, but right after seeing that Doom was the most mature and artistically resonant exemplar of games we could ever possibly strive to conceive, I saw lots of people try to justify games as a worthy medium from many angles: storytelling, visual art, audio design, immersion. I tried to myself, for a while (interactive storytelling being of great interest to me), but the part that I always secretly felt most passionate about, and the thing that always felt skipped over in favour of more traditional readings of games-as-other-mediums, is the thing we find hardest to put into words: how a game “feels”.

Don’t get me wrong: I’ve been utterly floored by the masterful meta-commentary on linearity in Bioshock, the beauty of vistas in Skyrim, the immersive emergence of Deus Ex. But the reason I’ll play a game for ages is to experience a sense of one-ness with the game. That feeling of flow you get when you’re cutting just the right line in Wipeout, or Tux Racer. And every time the art of games was discussed, it felt like caring about this sort of thing, this primitive instinct to move, should bring a sense of guilt to me.

I never wanted to bring it up, out of a sense of inadequacy: I can’t quote Joseph Campbell‘s Monomyth while talking about it, or come up with Ayn Rand Objectivist Philosophy to clothe a system, or make allusions to Spaghetti Westerns in order to bask in the reflected glory of another medium – I’m just too illiterate for that. Telling you that games are a work of art because of how fucking hard I nailed you with a rocket juggle into a rail shot while falling… just doesn’t seem to hit that lofty mark of impressing your relatives at Christmas, and make them feel like you’re not wasting your time.

And yet, I’d say that’s a good proportion of the reason I keep playing games.

I don’t mean to throw dirt at the intellectualization of game development or criticism (I’m just unintentionally good at it), or pull the old “GAmeplay is moer importent tahn graphix and you don’t even need a story” routine. I actually like where some games are going in this respect (even though I’m past the point of trying to get English Professors/my mum to respect what I do for a living).

What I’d rather do is play super-ponce to what I feel is an under-represented factor in the ongoing appeal of games. I want to show you why kinaesthetics are important, how to get them right, and how to be literate about them. I’ll also fight anyone who gets snobby about this area only being interesting to sugar fueled racist 12 year olds playing Call of Duty all night: You see, to the untrained eye, boxing is brawling, but aficionados see ballet. Okay, fight over, knock out in the first round. I wins. PERFECT!

"Hello. Kinaesthetics is like the heart of a game, but not literally, because games don't have hearts unless they're Zelda or made by David Cronenburg. Do you understand?"

I started my career wanting to be a designer. When I realized that I found it impossible to express the sort of feel I wanted to give to a game in words, pictures, or even video (and holy crap did I try), I decided that it’d be easier to show what I meant, even if it was horrible at first. I learnt to code. It changed how I design. It scared some coders, also. Not in a good way.

7 years later, and it’s clear I’m never going to be John Carmack, but with the release of easier tools and languages (Unity3D and C# are my current weapons of choice), I find it more than possible to explain what I mean by example, rather than expecting people to sit through my awful writing style (I’m not really selling this, am I?). And thank God, because writing about kinaesthetics is like dancing about architecture, and getting anyone to read it is like asking me to finish a simile on point.

Still better than the fourth movie.

As I’ve worked on games, I’ve noticed that people aren’t doing much to share information on game feel, despite it often being the difference between people loving a game, and liking-it-but-dropping-the-controller-for-some-reason-they-can’t-put-their-fingers-on.

There are loads of articles on the technicalities of game making. Lots on guiding philosophies. But Kinaesthetics are at the intersection of these: partly about software, partly about hardware and partly about meatware. Since it can get so technical, Kinaesthetic design has been fairly well relegated to the status of “plumbing”. Crucially, this can put it below the tolerance threshold of creatives and high minded designers. It’s seen as an engineering detail which must be stumbled and suffered through before the meat of the game can arise. Except that, in a lot of ways, it is the meat! Or at least, some edible form of cutlery. (Hmm. I warned you about these similies).

Since it can become quite engineering heavy, and is easier to engage with practically rather than theoretically, it’s hard for even those who are passionate about it to be left with terms other than “unresponsive”, “twitchy”, and “loose”. And because it’s so much more subtle than that, this post-it note of a dictionary is not really good enough.

"Unresponsive", "twitchy" and "loose"? There's a joke here which I'm not making.

I find it hard to reconcile the idea that games with orders of magnitude more scope than small indie games are often as not less kinaesthetically pleasing. There are reasons why this often happens (and admittedly, there are a lot of kinaesthetically rubbish indie games, too!), but no reason not to want to fix it. I think it’s partly because we don’t talk about it with the love that we should. We don’t know how. Or we feel silly for trying. Like, me, right now. This is embarrassing and it will not stop!

While games with horrible kinaesthetics can still have great merit due to other lovable qualities, good kinaesthetics are never going to detract from these. System Shock 2’s core mechanics were often like that scene in the Temple of Doom where the lady has to put her hand in the insect hole and crank a lever, but the combination of all these B- mechanics made an A+ game. Equally, BioShock 2 more or less nailed that side of things, but no-one is blaming the honed controls for the difficulties of sequalitis.

In fact, a good bridge of kinaesthetics into the experience is only going to make those higher level mechanics, or themes, or story, or environment easier to enjoy: the irritation and annoyance of embracing them is cleaned away.

"Hello, I am bad kinaesthetics sitting between you and a nice game, and I got a machete thing!"

When a game feels just right, it’s like standing up in the middle of crowded theater and shooting dead the man who has just answered his mobile phone, and seeing the rest of the audience quietly acknowledge that you did the right thing, and silently agree not to say anything during the ensuing investigation. And then we all enjoy watching The Iron Lady together in peace. And no-one does that slurpy thing at the end of their drink.

No-one is ever upset that a game feels great. No-one really believes that kinaesthetic pleasure retracts from any lofty statements a game has to make. And for all intents and purposes, it’s fundamental to all games ( even GUI heavy, non-time critical games), and yet, despite being a win for everyone involved, it’s often left as an unwanted stepchild.

When designers who are closer to the engineering end of the spectrum (“plumbers”) don’t try to understand designers toward the creative end of the spectrum (“super ponces”), and vice versa, a communications breakdown occurs. The story and the game start to work at odds, with neither side riffing off their jazz partner: Ludonarrative Dissonance tends to occur.

My thesis for this blog is that getting both parties to understand each other, through the common bond of kinaesthetics, is the key to marrying the two. IT WILL SOLVE EVERYTHING!

I’d also like to redress a balance in design focus which has been sliding in a sinister direction of late: In this time of psychology led game design where gamification is often used as a substitute for the intrinsic joy of kinaesthetics, we must remember: we are not merely carrot guzzling robots. We feel.

PRESS A TO NOT FUCK THIS UP

9 thoughts on “Why Kinaesthetics?”