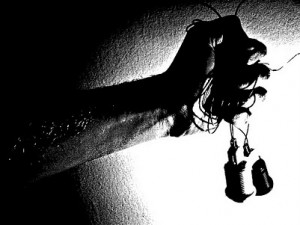 This is a blog about Kinaesthetics.

What’s Kinaesthetics? Wikipedia links this question to Proprioception (more or less a human’s true “Sixth Sense” – their sense of presence in space), but for the sake of this blog, Kinaesthetics are the “feel” of being in a videogame – virtual proprioception, symbiosis of man and machine, the texture, colour, and flavour of the interaction.

They exist at the intersection of ergonomics, human-computer interaction (including feedback in the form of graphics, animation, sound, haptics), psychology, philosophy, and programming. That’s a lot of rather broad subjects, but this is because Kinaesthetics can only be noticed in the emergent soup of this mongrel medium: without an interface, game state, feedback and intelligent agent interpreting the game, a game experience does not exist, and the quality of that experience, its Kinaesthetic, cannot be described.

In short, Kinaesthetics are where form meets function. It’s also a word you have to right click and ‘Add To Dictionary': It is a made up word.

I am Aubrey Hesselgren. I’m a UK-based game developer. I’ve worked both on independent games, and mainstream games. None have been particularly successful, or even release-able, but each has been more edifying than the last. In the 12 years I’ve tried to make games, I’ve come into contact with a lot of genuinely talented game developers who I’ve learnt or stolen from, and who have helped me along the way. My hope is to write articles from these experiences, create working examples to chip away at this subject area, and give you a few cheat codes to get you past the basics of making your game feel just right.

This blog is inspired, in part, by the book Game Feel by Steve Swink, and the envy felt when sound engineers can’t stop going on about how important and overlooked audio is in games.